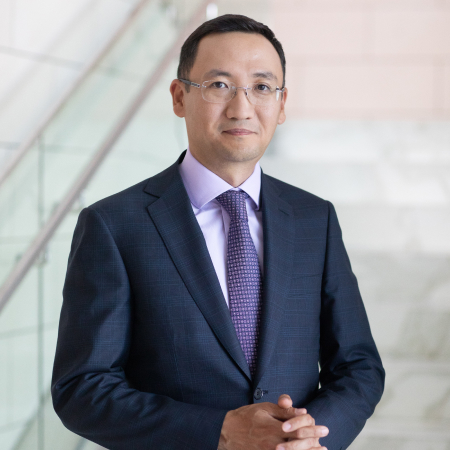 Deputy Chairman of the Management Board

Adil Mukhamejanov, born in 1981, a citizen of the Republic of Kazakhstan, was appointed Deputy Chairman of the Management Board of Baiterek National Managing Holding JSC by the decision of the Board of Directors in May 2021. Supervises issues of risk management, strategy and analysis, project financing.

Adil Mukhamejanov began his career in October 2003 as a specialist in the Project Management Department in KazTransOil CJSC. From March 2004 to March 2016, he worked at Caspian Energy Inc PLS (Toronto, Canada), and in Aral Petroleum Capital CJSC as a financial manager, later as Vice President, and a member of the Board of Directors. From September 2010 to December 2011 he served as Chairman of the Management Board of Otan Open Accumulative Pension Fund. From May 2008 to May 2016 – Member of the Board of Directors of AsiaCreditBank JSC. From September 2016 to May 2021 – Chairman of the Management Board of Kazakhstan Housing Company JSC.

He does not hold a part-time job and does not own any shares in affiliated organizations.